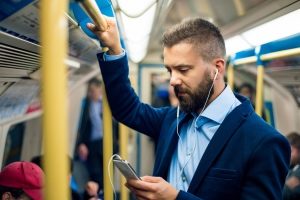 It’s funny to watch busy crowds these days; full of ‘connected citizens’ walking badly along the pavement or through the concourse, heads down and eyes glued to a smartphone held in one or both hands.

Whatever the internet, Google, WhatsApp, etc., have brought us, they haven’t done much for our grace and dignity when walking through public places.

But soon we may soon leave the ‘thumb-driven’ years behind, say goodbye to the dominance of the printed word, and see some grace return.

The beginning of mass communication: Using all 5 senses

Since the stone age, human beings have used eyes, ears, hands and voice to communicate.

At the beginning of the age of mass communication, when movable type and other ‘modern’ printing techniques were invented and printed books began to spread, it was still our hand and eye skills that enabled this. Many of the printing techniques required a high level of dexterity and the craftsmen printers had to use all five senses.

At the centre of it all was the amazingly plastic human brain, receiving information from all of our senses and transmitting through its control of our bodies. Usually the brain was most involved in directing the specialised parts such as mouth and hands, but then, as now, the shape and general carriage of the human body was important, too, for clues as to mood and interior thoughts. 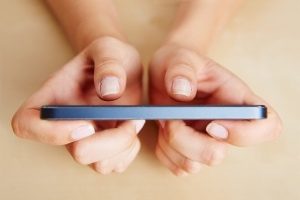 Much has changed since technological advance accelerated in the 19th century, bringing us the telegraph, radio, newsprint, TV, satellites, the internet, computers and now the smartphone, and much more.

But the data ‘output’ from our brain is still largely done by our voice plus our eight fingers and two thumbs. Or, in the case of smart phones, mainly by two thumbs! There is a bit of Siri and voice-control but it’s not widespread…. yet. And ‘input’ is still mainly the eyes and ears.

That’s why we walk so badly with our smartphones. It’s a totally unnatural position; yet necessary if, as a business person, travelling, you are to have any chance of keeping up with all the data streams you are meant to monitor: work email, private email, texts, Twitter, WhatsApp,  Facebook, RSS – and  more. All while enjoying a scroll through Spotify or catching a movie on Netflix.

No human being can ‘stay on it’ and remain sane for long, not because the brain can’t cope with the data streams but because the input / output ports are too narrow and inflexible and set up interference.

That horrible cramp in the shoulders from holding your phone on public transport is an example of this interference…. our analogue bodies are simply not built to cope with the vast volumes of digital data.

Luckily, our inventiveness is now producing an answer in the form of what are sometimes called ‘bio-hacks’ or ‘supersenses’. Essentially, technology which allows us to use our senses in new and more intuitive ways to interact with the data, thereby bypassing the narrow, fixed ‘ports’ such as your thumbs.

An example of this currently being developed by people like David Eagleman, the neuroscientist whose latest venture, Neosensory, is a wearable vest containing 32 vibrators that transmit data directly onto that vastly underused data port, the human skin.

Using a direct device like this you can train yourself to ‘hear’ using your body’s surface, initially quite crudely but eventually able to distinguish voices and noises by the vibrations felt on your chest, back and sides.

The point Eagleman and others are trying to impress us with is that we currently experience the world as if we were standing inside a letterbox, looking out at a fixed field of view through a narrow slit.

As we develop technology and cultural practices to widen and broaden that slit we give ourselves many more options to handle and monitor data. ‘No thumbs’, if you will. 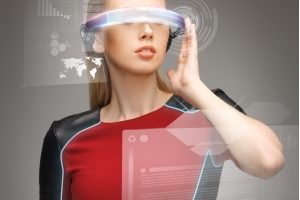 Widening our field of view

For example, if you are safety manager at a power station, working with computers to monitor the signals that show if the turbines are working well, then these signals could be ‘felt’ as vibrations using via your intelligent vest. Any variation would be noticed and could be investigated further. This would leave the manager’s eyes and ears free for human interaction or other work.

You could wear a vest to be told how well your shares are performing, or to enjoy an artwork in a new way. Or to tell you which way to walk through a maze of streets on holiday, without looking like a tourist peering into their expensive phone, oblivious.

Two things need to be clear: first, this kind of technology is pioneering so the first uses are small-scale and specific. It’s not yet widespread but once people start mixing up their senses with add-on devices we will see a very large expansion in our capacities. Expect to see it first in gaming, training, high-tech monitoring, and, sad but true, military and security applications.

Secondly, and most importantly, the widening of the ‘ports’ to the brain are pretty well certain to find a willing brain on the other side able and ready to adapt and change to the new senses and mix of senses.

Keeping in touch with the office, literally

While modern life has seen a huge spike in digital data, with our eyes and ears and thumbs struggling to cope with crude ‘tapping’ devices little different in many ways from Morse code machines, the brain evolved under the pressure of evolution in the high-sensory environment of the savannah, the forest and the jungle.

Anyone who has been out into a dangerous animal zone with an experienced tracker at 5 AM as the sun comes up will know that the human brain has plenty of capacity to manage data. What’s more it is a wonderfully plastic computational device and can adapt to new signal pairings in a matter of weeks, days or months.

For example, if you were to wear a blindfold and rely on a Neosensory vest to give you spatial information, your brain would soon learn to transmit the signals derived from sound / vibration within its own neurostructures to that part of the brain that normally handles shape, size and distance. That learning is really powerful and can happen at any age.

If we get this new technology right, we will be able to walk properly again across the street, smiling and greeting those we meet while still keeping in touch with the office, literally.

Your brain will still be beautifully analogue and organic, so remember to keep treating it well – with good food, rest, and delightful and healing experiences. Let it keep company with good thoughts and compassionate instincts.

That lump of grey-pink jelly inside your skull and down your spine may be the best computer your 125 new senses ever get.