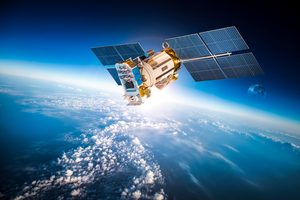 Revolutions always turn things on their heads. That’s why they are called revolutions.

It’s like this: we see something new happening – like the Space Age – and we imagine it will be all about rocket cars in which we can go shopping, a Space Academy for our kids, and a Star Trek quest to ‘explore strange new worlds and to boldly go where no man has gone before’.

But reality is more surprising than Hollywood and it brings us a future that we didn’t and couldn’t expect. Take the basic fact about rockets and space: they are all about getting OFF this planet so you’d expect the next step to be about what’s ‘OUT THERE‘. Right?

The next step is all about the very Earth which that rocket has just left and those things on Earth that can be seen better – much better – from up there.

And for a change, this next phase is not all about government programmes and contracts, defence and intelligence (although there’s still quite a bit of that).

It’s about data, big, big data in commercial use. In fact Space Sized Giga Data of a volume and type we have never seen and been able to buy before.

Here’s what is happening.

First, price and size. Once upon a time the only people who could afford to build big rockets were big nations with big defence budgets. Communications satellites weighed several tonnes and were as big as a house.

Now, you can do a lot with a much, much, smaller satellite, perhaps as small as a couple of kilos and as big as a children’s shoe box. The instruments are smaller, more reliable, cheaper and many of the parts are becoming standardised. You can put them into orbit with a smaller vehicle or piggy-back on a bigger launch. You might even take risks and bear the loss of a million dollar satellite, and there is less risk of your company going under with a single $60 million burn-out. There are even firms competing to take your instruments into space, and you don’t need to build the whole thing yourself. You can find a chain of suppliers to get you a certain sort of ‘space-enabled data’ and leave it up to them how they do it. All this means that whereas about 1,500 satellites went up in the decade to 2015, in the ten years to 2025 that number is guestimated to reach 9,000. 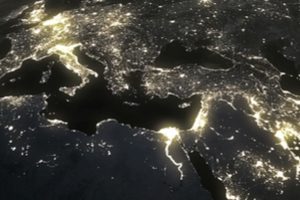 A big factor in this revolution is that changes in technology, price and availability of bandwidth have meant that Low Earth Orbit systems are now proving very workable. LEO systems are when you send up a constellation of satellites to fly around the Earth at c7km a second at a height of somewhere between 500-2,000km. Your group of say, 40-80 smallish fast-moving satellites, can cover the whole surface of the Earth, even though any one point on the surface will only be in touch with one of the moving satellites for, say 20 minutes at a time.

Clever software makes sure you have good contact, or can collect good images, despite the satellites whizzing about as each one hands over to the next. And unlike a big geostationary satellite loitering far higher above the Earth, each one is much cheaper to get into space in the first place (although it will eventually fall down).

One big advantage is that, because Low Earth Orbit satellites are so ‘close’ to us, the delay times on the signals to and from Earth are small. In fact, at about 5-100milliseconds, the ‘latency’, as it’s known, is getting close to the sort of delay you could expect if you were connecting places on Earth by fibre optic cable.

Which explains why a giant player like OneWeb (backed by Airbus, Hughes, CocaCola, Richard Branson, etc) is racing to get enough satellites into near space to offer broadband from satellites to that half of the world which currently has none.

Indeed, OneWeb sees a totally broadband world as possible by 2027. Which has big implications for advertisers and consumer goods manufacturers – and for democracy, too, I suggest.

But what about observing and analysing the world, in real time, from space?

VC firms like Grishin Robotics, who specialise in smart hardware as needed for space-enabled data, are constantly reminding us that it’s all about the analysis and the insight, not just the collection of data. Although you need to do that, too.

Who knows what the firm Planet is going to do with the Terra Bella business it has bought from Alphabet/Google but it’s clear that the SkySat HD video imaging (which you can see on Youtube) has 1000s of potential applications to, as they put it, ‘use space to help life on Earth’.

If you can look across any spot on Earth and see objects of well under a metre in size and watch them move, and measure them through the day, and see vast swathes of neighbouring objects, too, then you have a lot of signals to human and natural activity. If you can see in the dark and in clouds, too, then you have even more. And signals are worth money.

A view from above

Clients for your services that can gather and interpret these signals are, of course, City firms who want to know about crop growth-rates and likely corn prices. They might also be competitors in the steel market measuring the heat from a blast furnace to see how much steel a rival is are making, or they might be oil traders measuring the shadows cast by the floating lids to dockside oil tanks – to know how much that country really does have in reserve.

Other clients will be state enterprises without the budgets of the Defence Department, people in traffic planning or disaster relief, or pollution control who want to see what’s happening, and the trends as they develop. Migration control agencies won’t be able to use these commercial services to see individual people walking across remote areas, but they can see vehicles, and watch as new foot trails get worn in.

Of course there are already very excited investors in the rocket, payload and satellite businesses around Space 2.0. But probably the real volume of new firms will come in ‘Space App development’. That is in the development of commercial products that turn pixels into insights, pure data into readable signals.

The amount and quality (and low price) of space enabled data will mean a lot of jobs for those with the analytical skills needed to take the data and turn it into a sell-able graphic for a paying set of customers.

I predict visualisation techniques will be in high demand, too as much of this material is too voluminous to be read in any other than pictorial form. Videos that are doctored to show trends, pick out insights, and respond to interrogation, will be common.

Just as a Darwinian forest of Apps has emerged to connect us better to digital services, there will be a new wave of invention in intermediary Apps designed to help us make use of this new Earth data, gathered from the sky.

It’s not Space as we expected it, Jim, but it’s here.