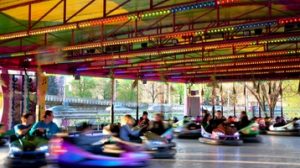 HUMAN beings used to be just a part of the natural world of Earth. In quite low numbers.

We were a sort of clever chimpanzee – but with more space for reasoning and language. Our numbers grew and we did very well, even if our newly-grown cortex brain was hamstrung by the way evolution kept our mammalian and reptilian instincts on board. Instincts that handled getting angry, or hungry and finding a mate.

Each human was – and still is – a sort of fairground bumper car that has one dashboard but three steering wheels, three accelerator pedals and three drivers. All fighting for control of the vehicle.

One driver (the reptile brain stem) gets angry and hungry a lot but reacts quickly, another (the mammal brain) is very interested in family and friendship and the third (the super chimp with the big cortex) is very thoughtful and good at planning. But who is in charge at any point is often unclear and, well, the bumper car often crashes into the many other bumper cars, each with their own three drivers in the front.

Fortunately, we have developed large-scale cultural resources like social and democratic institutions, regulated markets, industrial processes and mass information and we use these to try and make sure that the big decisions are made by the rational part of us.

Some systems work and some don’t but violence has declined and technology has nearly solved most of the problems the reptile brain was worried about. At least in theory.

In contrast, in the pre-modern era we not only had plenty of violence but we also had plenty of disasters. Just consider Easter Island where our clever statue-making culture seems to have wiped itself out by using up all the trees. Or those deserts around the Middle East and North Africa which used to be green and leafy. Or the giant birds of New Zealand or Madagascar, used up or wiped out by our arrival.

Of course, the wars of the 20th century still saw us developing advanced techniques for wiping out millions in one go and we still live in the shadow of nuclear war. Remember that it was only recently, on the 26 September 1983, that one man, a Lt Colonel in the Soviet air defences, is said to have singlehandedly avoided a nuclear missile exchange and ‘saved the world’ by ignoring orders when his alarms showed that the USA was launching a pre-emptive five-missile strike. He guessed the system was faulty because five seemed a low number for a first-strike attack. So, without much evidence, and in the middle of a period of Cold War itchy trigger fingers, he reported the strike alerts as a malfunction.

Later the error was all put down to sunlight on clouds over North Dakota combining badly with very eccentric satellite orbits used by the Soviets; Lt Colonel Stanislav Petrov’s death was reported this week, aged 77.

But mostly, in the distant past, wipe-outs were local problems and the Earth was big. We always had somewhere else to move to.

Now things are different.  Now we are global, dominant and capable of much more – both in a positive and a negative sense.

At some point in the last 150 years we stopped being just part of the natural world and became a major force for changing it. We are now living in what some call the Anthropocene Era, the age when humankind changed its environment fundamentally.

There are many markers for this but one of my favourites is the year when nitrates stopped being bird pooh scraped off rocks in the southern oceans and started to be made in factories – for both fertiliser and explosives.

Carl Bosch perfected the industrial Haber-Bosch process in 1913 in Oppau and the resulting ability to make ammonium nitrate has enabled a vast increase in agricultural productivity, and allowed us to feed world population that will soon be five times that number. Half of the nitrogen in your body has been artificially fixed.

This sudden leap in nitrates will be visible for ever in the geology of Earth, a marker line that defines the beginning of the age when humankind held the balance of power in the natural world. Let’s hope it is not shortly followed by a line in the rock of nuclear radiation.

Numbers are a crucial tool for the rational part of the human mind and handy number to apply to this simplified story of humans on Earth is the number 4, starting with 40,000 years ago and dividing each time by 10.

Four decades ago we were heading to the Moon using the first mini-thinking machines and 4 years ago humans bought a billion smartphones in 12 months. Each one was an advanced machine for thinking and connecting that is already transforming our world.

The near future of 2021 is tricky to predict but, say, in 40 years’ time, that is by c2057, we will surely have advanced thinking machines that can outsmart us on all and any rational measure. Maybe much earlier.

Our technological power is already so great now that wiping many of ourselves out becomes a very easy mistake to make. Think about Lt Colonel Petrov and how glad we are that he was not having a bad day in 1983.

Our hard-wiring remains that of the alligator, horse and super-chimp combined, but that chimp has invented some turbo-boosters to make that bumper car race at a speed where the crashes are harsher and

the risk of a major pile-up much greater.

Sure, we have risk assessment skills and good planning tools, and sensible democratic systems in parts of a world where, in theory no one need every starve.

Yet we seem to be heading for a period of critical volatility in the life of our species without an awful lot of spare smarts.

Of course, the answer may be simple: make room on the bumper car’s driving bench for a fourth driver, (alongside the reptile, the mammal and the super-chimp) – viz an entirely rational but super-endowed helpmate, the robot.

Smart phones and the new connectivity between billions of people is already creating the basis for a kind of external intelligence.

If we come up with a really reliable friend and risk-manager robot, I suggest we call him ‘Sensible Stan’. Short for Stanislav…